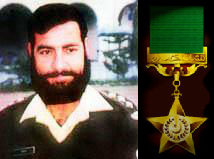 Sher Khan was the youngest of his two brothers and two sisters. His mother died in 1978 when he was eight. He was brought up by his paternal aunts. His family is deeply religious and they say that Sher was an embodiment of piety and Islamic teaching.

After completing his intermediate from GovernmentCollege Swabi he joined Pakistan Air Force as an air man. On completion of his training, he was appointed electric fitter (aeronautical) at Risalpur. During these years he appointed twice for commission in the Pakistan Army as this was what he really wanted to do — he succeeded the second time. He joined the PakistanMilitaryAcademy, Kakul in November 1992 and graduated in the 90th Long Course in 1994. His first posting was at Okara in 27th Sindh Regiment. Always smiling as a devoted soldier, he was fondly called Shera and was very popular among his officers and colleagues. In January 1998 he volunteered to serve at the LoC in Kashmir, he was posted in 12 NLI.

The Tiger Hill Complex is a set of six strategic posts; the Tiger Hill Top, Western Spur, Eastern Spur, India Gate, Rocky Knob and Helmet. If the Indian account is to be believed, Captain Karnal Sher Khan was responsible for setting up and defending one of these posts. On the other hand, the Pakistani account states that Sher was responsible for setting up forward defensive posts around the Gultari and MushkohValley areas in Kargil, and that he had nothing to do with Tiger Hill. This article is based on the Indian account. In any case, the actual location does not matter as will be seen in the remainder of this article. From Indian readings, it appears that Sher was in fact defending the post on the Western Spur. The truth, however, will never be known. The active participation of the Kashmiri Freedom Fighters in the Tiger Hill battles is, however, a well researched fact.

Manning the Western Spur post was Captain Karnal Sher Khan with 21 ORs (Other Ranks, men who are ordinary sepoys and do not hold any specific rank).

From 26th June to 27th June, the 41 Field Regiment excessively shelled the Western Spur post with no less than 19 Howitzers, while the Indian Air Force Mirage 2000 jets flew sorties over the post and pounded the bunkers with laser guided bombs. Under these circumstances some infantrymen from 8 Sikh also fired at the posts held by Sher and his men, and 'dared them to recite the Kalima, for it will be their final one'. Obviously, the Pakistanis and the Kashmiris did not get any sleep during this time.

It was around 9:00 PM on the 27th of June 1999 that the 8 Sikh launched a fierce attack on the Western Spur post. The tired 'intruders' tried to fight back, but the sheer number of the Indians (450 - 500 men) along with the IAF and Artillery support made it impossible for them to hold on. There were not many casualties on either side, but as far as Karnal Sher's men were concerned, there didn't have to be many, as they were not great in number to start with.

Karnal Sher finally retreated from the post, going to a point of lower elevation. The Indians had gotten hold of the Western Spur post. They were in a terrific position to launch the final offensive on the other posts, especially the Tiger Hill Top.

Karnal Sher was in a terrible spot. The Indians were now at an elevated position; they were much greater in number and had the support of a much bigger artillery. Unlike Sher's men they were well rested, as the enemy did not subject them to intense fire and they also had no shortage of ammunition or food.

One of Sher's men had died during the attack. Most of the others were wounded. To top it all, some Sikh soldiers were still daring them to come out and recite their final Kalima.

One of Karnal Sher's men asked him about what they were supposed to do next.

The stunned man gazed at Sher. Counter Attack under the circumstances was suicidal. The Indians had an advantage in every thinkable manner. They had also been fortifying their defense ever since they had taken the Western Spur.

"Yes counter attack. The Indians attacked my post at night, with heavy artillery and air support. I will attack them in broad daylight with the men that I have left."

Sher had been operational in the area since November 1998. He knew the Drass Sector area inside out. He had a good idea of the positions that could be taken for an attack on the Western Spur. The 8 Sikh Regiment had not utilized any of those areas in their attack, hence Sher took the chance they were not well aware of their existence. During the night he placed his men in those positions, strategically placing the compact artillery that they had in the optimum areas.

The counter attack, with 21 men, was launched on the Indians occupying the Western Spur. Sher's men were told never to stay in on position while attacking, and the positions that every man was to move to and from during the attack were also identified. Every one of Sher's men was changing position to no less than 8 places.

This was the shortest battle of the entire Kargil operation, taking no more than one hour. There were many reasons for its success. First of all was the deployment. As an Indian soldier would be killed, the others would direct fire towards the area from where the fire came from. In the mean time however, the Pakistani/ Kashmiri would have changed his position to another area where he was safe from the Indian firing but still could see them.

Secondly, the Indians were not expecting an attack from the positions where Karnal Sher had deployed his men. Had they known about them in advance, they would have placed their own men over there as a defensive measure.

The third was the timing of the attack. It came at the most unexpected time, only 7 or 8 hours after the Indian offensive.

Finally, there was the sheer ferocity of the attack. Sher's men knew before going into the attack that they are going in for an impossible task. They had no fear of death, and that itself makes a better fighter during any battle.

As the 8 Sikh regiment began to retreat, Kernal Sher left his position and came out in the open. He started reciting the Kalima aloud. Picking up his machine gun he started charging towards the retreating forces.

"Cowards!" he said, "Where are you running off to? I will not let you run away like this."

Sher's remaining men, having suffered some casualties while they were ascending the Western Spur post, finally managed to reach on top. They replaced the Indian Flag with the Pakistani one and started chanting slogans of 'Allah O Akbar'. Sher, on the other hand, was obsessed with the retreating forces.

"I am reciting the Kalima as you had dared me to." he shouted, "Where are you running off to? Stop and fight. Make this my last Kalima if you can". While saying this he was seen running after the retreating troops, firing at will, with little or no opposition except from the ongoing artillery shelling. 10 or 12 of Sher's men, who had taken up positions on the Western Spur, also opened havoc wreaking fire on the retreating troops to add to their woes.

Captain Karnal Sher followed the Indian troops until he reached the proximity of the 8 Sikh Regiment base camp.

One of the soldiers told the Commanding officer that the enemy commander was following them down. The CO told the man not to worry as one man would not dare enter the base camp. However, he was anticipating that a much larger party of militants would attack the base camp. He ordered his men to take the necessary defensive positions.

While the 8 Sikh soldiers were taking their defensive positions, they were greeted with the sound of 'Allah O Akbar' followed by intense machine gun fire on those areas where any movement was taking place.

Anticipating a company sized attack, the CO was stunned to see one man, reciting the Kalima aloud, charging towards the center of the camp.

"Come out cowards!" Captain Sher shouted having reached the center, "I will show you how to fight a battle".

Angered by the dare inside their own camp, two Sikh soldiers tried to attack Sher. Their attack was of no avail; the captain, who had started firing in their direction the moment they tried to move, killed both.

It was apparent that this was not an attack by a complete company, but by only one man. "You are surrounded from all sides " the CO shouted to Sher, "There are no men with you. You cannot possibly kill us all. There does not have to be any unnecessary bloodshed. Lay down your weapon and Surrender".

Sher fired in the direction of the Commanding Officer's voice. "I would rather die than to surrender to you" he said. While trying to continue firing, Sher realized that the ammunition in his machine gun had finished.

Seeing that he no longer had any ammunition, the Indian soldiers, including their CO, came out in the open and showed Sher that he was indeed surrounded from all sides. They started moving closer and closer to him, tightening their circle around him.

"Look around yourself" he said to Sher, "There is nothing more that you can do".

Sher looked around. There were more than fifty men who had surrounded him and could shoot him at point blank range. Instead of giving up, he started reciting the Kalima aloud once again. Seeing that the closest to him was the CO, he charged him and pushed him back by hitting him on the head with his empty machine gun. Seeing that Sher was not surrendering, and was in fact going to attack him for the second time, the 8 Sikh regiment Commanding Officer told his men to open fire on the militant.

The 8 Sikh regiment soldiers opened fire on Captain Sher. Hit many times, he tried to attack the CO for the third time, but of no avail.

Sher had always believed in not dying at the enemy's feet. He was about five feet away from the CO, who could see the desperate attempt Sher was making in not to fall down. Finally, Sher sat down, with his knees bent and touching the ground, and his machine gun still in his hand. The Kalima that he had been reciting so far became lower and lower in volume until it finally stopped. Captain Karnal Sher Khan had died.

Some of the Sikh soldiers became ecstatic that they had indeed made the 'intruder' recite his final Kalima. Two of them ran to Sher Khan's body to kick it from a sitting position into a one where his head was touching the ground.

Seeing the intent of his men, the CO ordered them to stop. He told them that this was a brave man and his body should not be desecrated at any cost. He ordered that Sher's body be brought back to Srinagar rather than being left at Tiger Hill. Upon finding out that Sher was a Pakistani Captain, he made sure that Sher gets a proper military treatment from the Indians. It was he who wrote the citation of Captain Sher, recommending him for the highest gallantry award in Pakistan. The citation can be found at Captain Sher Khan's residence in Fajounabad Charbagh, Swabi.